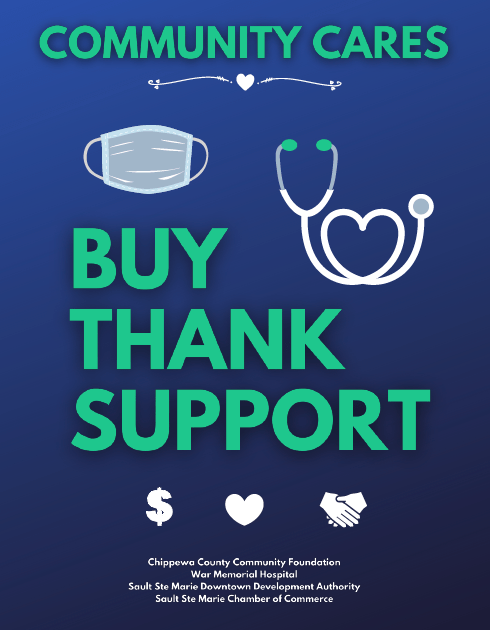 Amidst the current COVID-19 outbreak in our community, the Chippewa County Community Foundation is teaming up with the Sault Ste. Marie Downtown Development Authority, the Chamber of Commerce and War Memorial Hospital to support local businesses and show appreciation for frontline healthcare workers. The inspiration for the effort started with Debbie Jones, Executive Director of the Chippewa County Community Foundation, “There are heroes in disguise on the front line, and we need to support and be thankful for our heroes who can’t stay home.”

Jones was moved to coordinate an effort to help connect members of the community who want to help support essential healthcare personnel and give a boost to local businesses, many of whom have struggled through closures, reduced capacity and other challenges this year. The Community Foundation, Downtown Development Authority and the Sault Ste. Marie are teaming up to encourage individuals to purchase a $15 gift card (recommended minimum) to support our retailers, restaurants and bars show of support for local essential workers.”

The goal of the campaign is to acquire one thousand $15 gifts. There are three ways to participate in the effort. Jones is encouraging individuals to stop by their favorite local business and purchase a gift card, purchase Chamber Bucks from the Chamber of Commerce, or visit the DDA office to purchase Downtown Dollars. Donations can then be dropped off at any one of the three partner locations:

There will be dropboxes at each location to minimize contact. There will also be thank you notes donors can sign.

Help us Reach our Goals This Giving Season!

Tracey was born in Ironwood, Michigan on June 8, 1964 and was welcomed as the first daughter of Wilmer and Muriel (Galer) Lawson. She graduated from Sault High School with the class of 1982. She continued her education at Lake Superior State University where she earned her Masters in Business Administration. She became a mother in 1994 when she gave birth to her only child Colin. She worked at LSSU as an Administrative Assistant and Adjunct Instructor until 2014. She then moved to Rhinelander and worked at Nicolet College as an Administrative Professional and Office Technology Instructor.

Tracey was a dedicated mother first and foremost. She treasured every moment with her son Colin and the two share an unbreakable bond. She was her son’s number one fan, biggest role model, and will continue to inspire him for the rest of his life. She loved spending time with her family and she made friends everywhere she went with her quick wit and vibrant personality. Her kind heart, zest for life, and ability to brighten the day endeared her to those that knew her. She enjoyed giving back to her community as a member and treasurer of PEO International and a volunteer at the Rhinelander Swim Club. Her hobbies included crocheting, quilting, and traveling.

A memorial service will be held at 4:00 PM on Monday, October 5, 2020, at C.S. Mulder Funeral Home in Sault Ste. Marie, Michigan with Pastor Bill Rudd officiating. Friends may gather at the funeral home from 1:00 PM until the time of the service.

In lieu of flowers, memorials may be left to the Tracey Lawson MacQuarrie Swim Scholarship through the Chippewa County Community Foundation. Tracey loved being involved with competitive swimming and she traveled across the country to watch Colin swim. This scholarship is being created to help aspiring young swimmers afford the opportunity to swim for the Sault Competitive Aquatics Team. 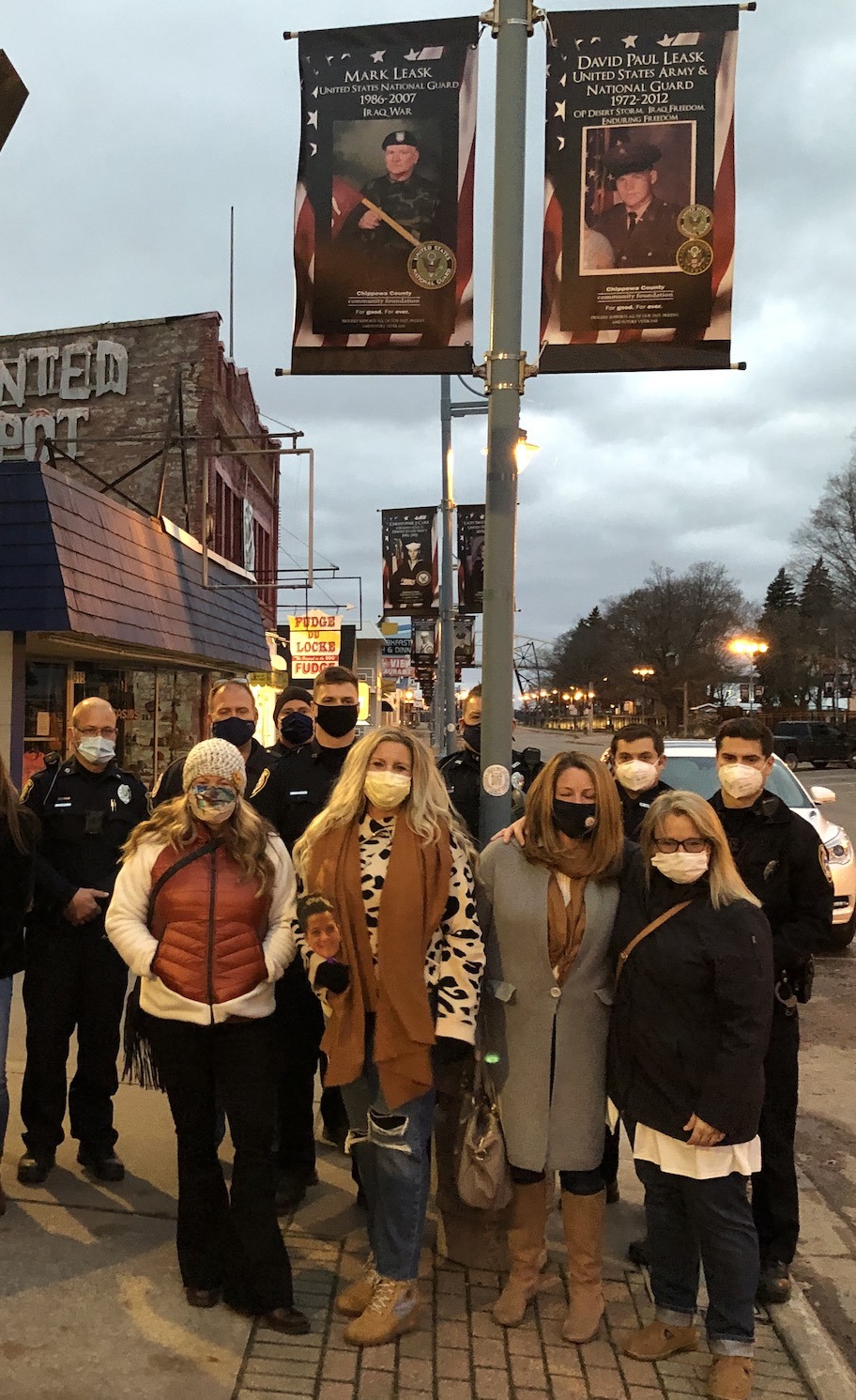 The Chippewa County Community Foundation would like to announce the creation of The David Leask First Responders Endowment Fund. This fund was created by The Iron Warriors Motorcycle Club in David’s memory. David joined The Iron Warriors in 2002 and served with distinction as the Sergeant-at-Arms. The primary purpose of the fund is to provide a permanent endowment fund for assisting First Responders families facing challenges residing within Chippewa County. To qualify grantee must be an immediate family member of or employed by the Police Department, Tribal Police, State Police, Federal LEO’s, Sheriff’s Office, Corrections Officers, Fire and Rescue families facing challenges residing within Chippewa County, Michigan..

David Paul Leask was born on July 27, 1953 in Sault Ste. Marie, Michigan. David passed away on July 13, 2017 as a result of a car accident in Capon Bridge, West Virginia.

David received his degree from Lake Superior State University before serving as a police officer for 20 years in Sault Ste. Marie, Michigan. David served in Desert Storm, Afghanistan and Korea before retiring from the Active Army National Guard as a Major. David loved hockey and riding his Harley all over the country. Nothing meant more to David than family, constantly traveling to enjoy his daughters and grandchildren. David was involved in the Capon Bridge, W.V. community with the American Legion and the VFW.

If you have any questions or would like to donate to this fund please contact Debbie Jones at 906-635-1046 or [email protected].

Our mission is to inspire a philanthropic culture with our community to promote a thriving place to live, work and play.

The role of a Community Foundation is to provide for the FUTURE needs of the community by accepting donations to establish permanently endowed funds, and using the interest from these invested funds to benefit the community through grants for projects.

The Community Foundation is governed by a Board of Trustees and has a youth component, the Youth Advisory Council (YAC). The Chippewa County Community Foundation annually appoints an independent auditor to conduct an audit of the combined financial statements of the Foundation.

The purpose of this Investment Policy Statement is to establish a clear understanding of the philosophy and the investment objectives for the Chippewa County Community Foundation (hereinafter, “CCCF”). This document will further describe the standards that will be utilized by the Finance Committee in monitoring investment performance, as well as, serve as a guideline for any financial manager retained.

This Spending Policy Formula is applied against the net asset value of all endowed funds at the calendar year end of each year. Net asset value is after the investment and administrative fees have been paid.

The Chippewa County Community Foundation is a nonprofit, community corporation created by and for the people of Chippewa County. We are here to help our donors make a positive impact on their community.